We were having a good time in Barcelona before moving to Athens when it hit us. Who knows when we’ll be back!? Hence, we decided to visit Albarracín and Teruel, a less known side of Spain. Fortunately for us, these two marvelous places are not so popular with the masses so we had a fantastic experience. Located in southern Aragon along the main road that connects Zaragoza and Valencia, both places remain off the beaten track destinations. If like us you visit in early autumn, you might be lucky and have them to yourself. Though Albarracín and Teruel have outstanding architecture, nature is gorgeous too. What’s more, Albarracín is known for its incredible treks. 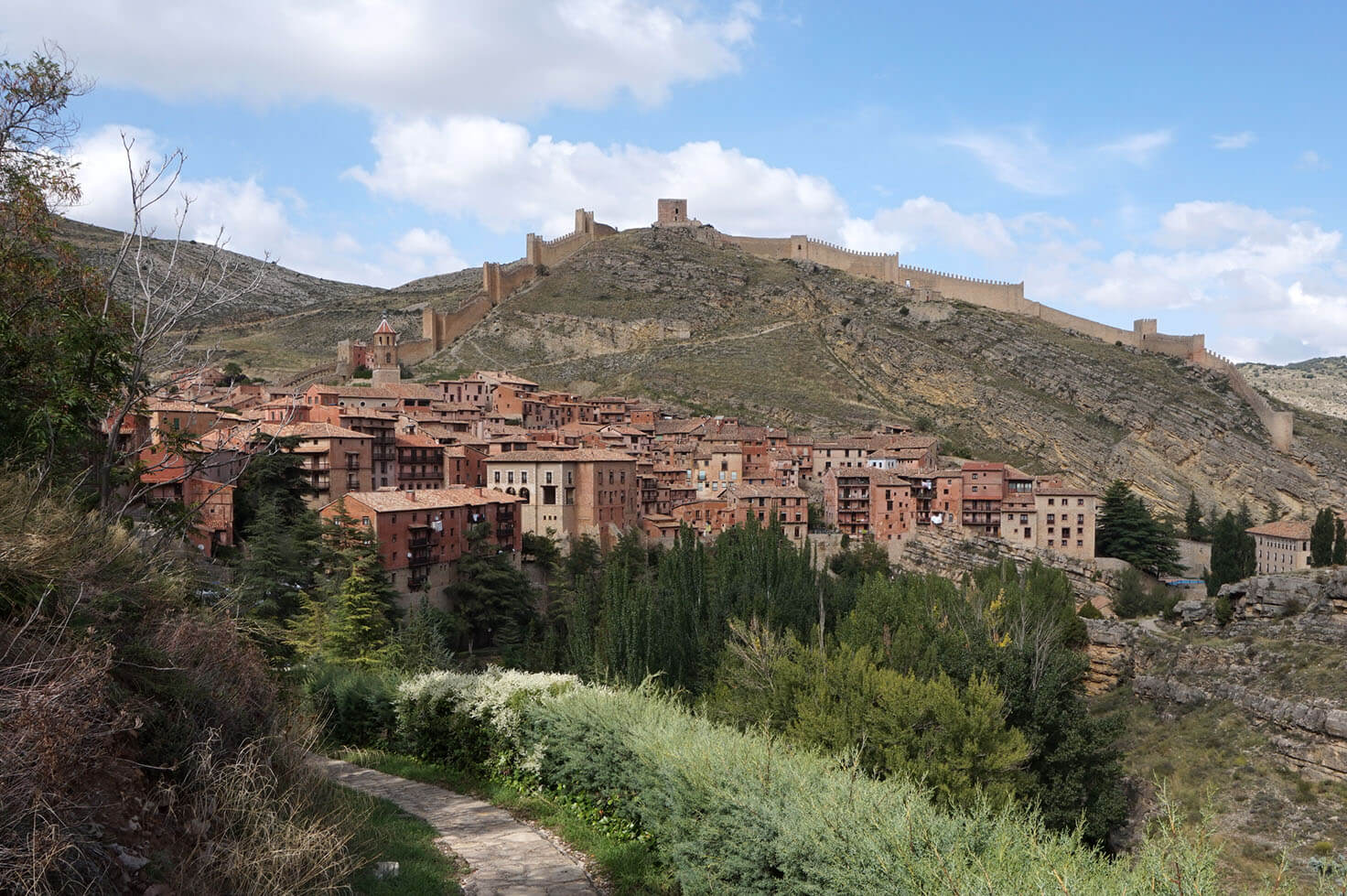 The City of Teruel is the capital of Teruel Province in the Autonomous Community of Aragon. With a population of just over 35000, Teruel is the smallest provincial capital in Spain. Probably the rugged mountains that surrounded it isolated Teruel through the centuries. King Alfonso II founded Teruel in the 12th Century at the border of the Crown of Aragon.  Remember that the Moorish Empire dominated the area for centuries until the “Reconquista”. Yes, the term is a bit absurd. Indeed, the Moorish empire controlled a big chunk of what is now Spain for some 800 years. The same old story: empire after empire claiming a natural right to exploit people and nature. Anyhow, many Muslims decided to stay together with Christians and Jews. It is this rich cultural heritage that gave birth to the unique Mudejar Architecture that flourished in Teruel in the Middle Ages. 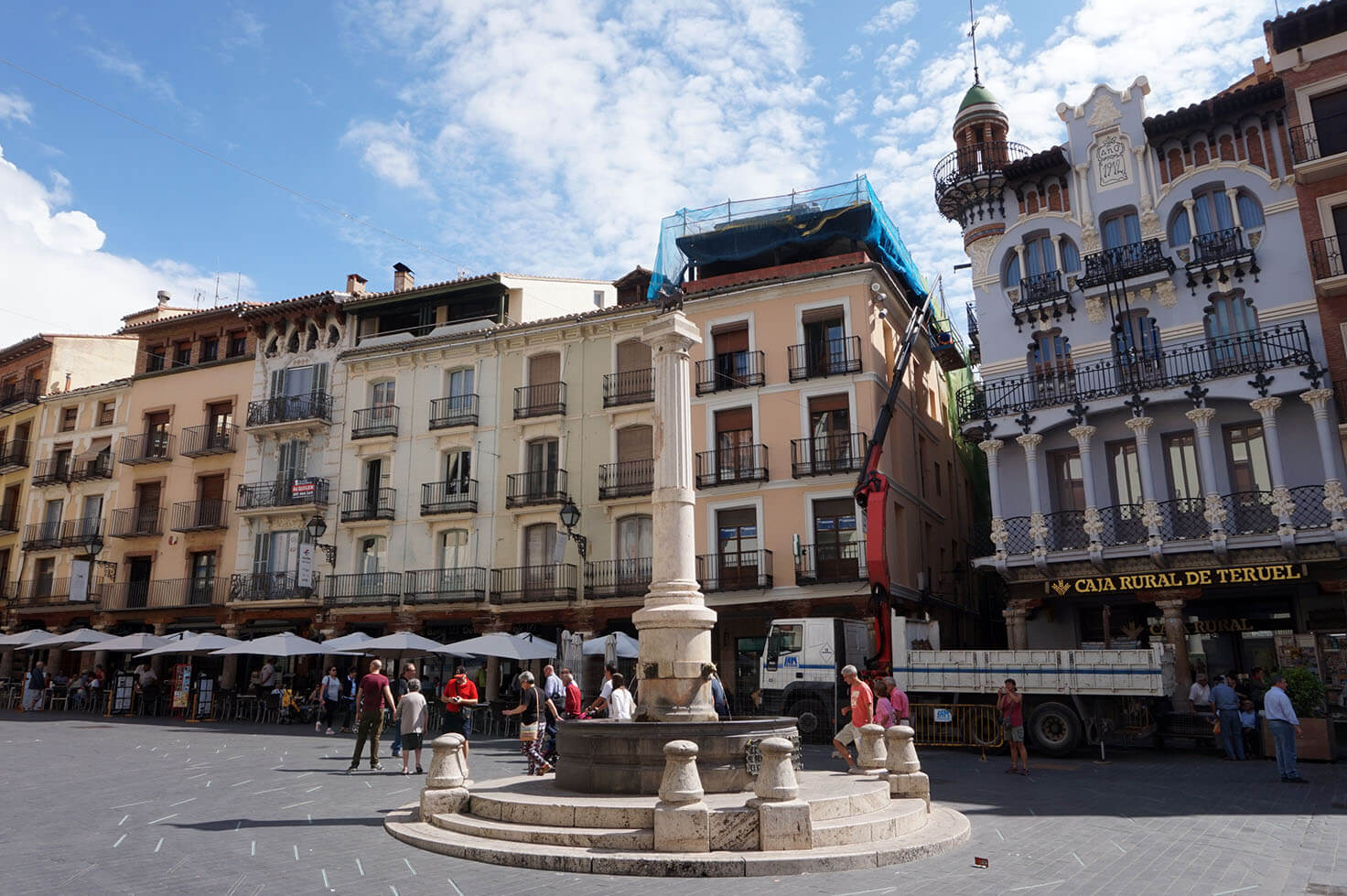 What to See in Teruel

You will find almost all of Teruel’s attractions within the city walls. One of the first structures you will notice is the Escalinata de Teruel. This giant staircase connects the upper and lower towns. Guess what? Mudejar architecture inspired its architects! From there walk along Nueva Street all the way to Plaza del Torico, Teruel’s main square. You’ll notice the little statue with a bull (hence the square name) and the art nouveau Casa del Torico. In fact, you’ll find plenty of beautiful art nouveau houses in Teruel’s old town.  If you continue along Joaquin Costa Street until the end and then turn left you’ll spot Teruel’s Aqueduct Los Arcos. Other sites include the Teruel Museum, the Episcopal Palace and the Amantes de Teruel Ensemble. 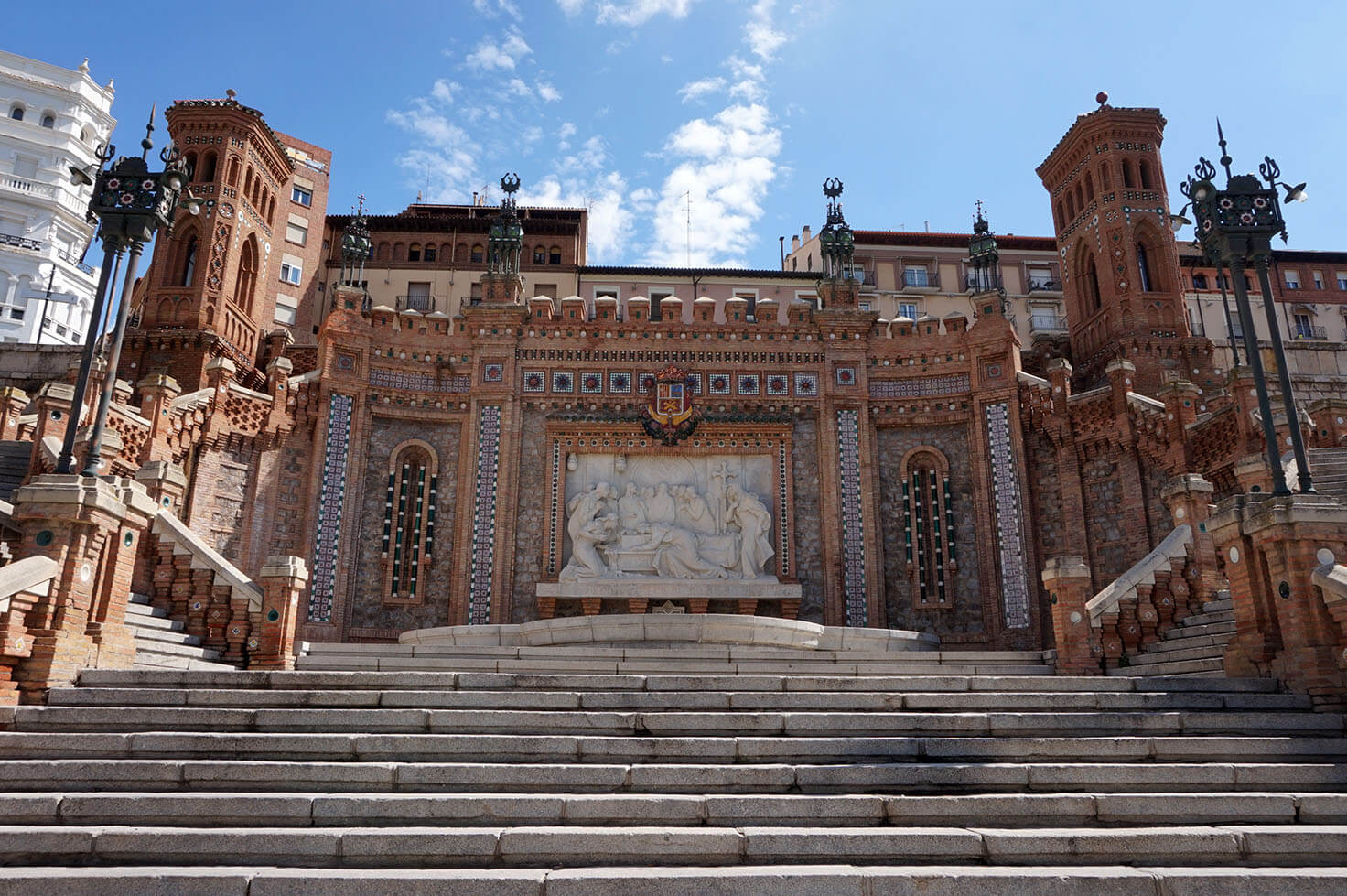 Mudejar Architecture is an artistic style that incorporates decorative elements typical of Muslim architecture into Romanesque and Gothic structural traditions. Therefore, Teruel’s Mudejar buildings have rounded or pointed arches and glazed ceramics. In 1986 UNESCO included 4 medieval churches in its list of World Heritage Sites: the Teruel Cathedral, the San Pedro Church, the San Martín Church and the San Salvador Church. All are easily recognizable by their tall red brick towers.  Take your time and climb as many towers as you can. The views from the towers are fantastic! Where to Stay in Teruel

Contrary to what we expected, Teruel has plenty of good hotels to choose from. Since most sights are inside the old town, that’s the place to be. We stayed at the fabulous Reina Cristina, next to the Escalinata. Great service, comfy rooms, and fantastic views made us feel at home. Other two nice hotels inside the old town are the Sercotel Torico Plaza near the main square and the Hotel Teruel Plaza on San Juan Square. At the footsteps of the Escalinata stairs, you will find another good option: the Gran Hotel Botánicos. Finally, if you have a thing for historical buildings stay at the Parador de Teruel. Granted, it is a bit out of the city, but we are talking about a beautiful historical palace. 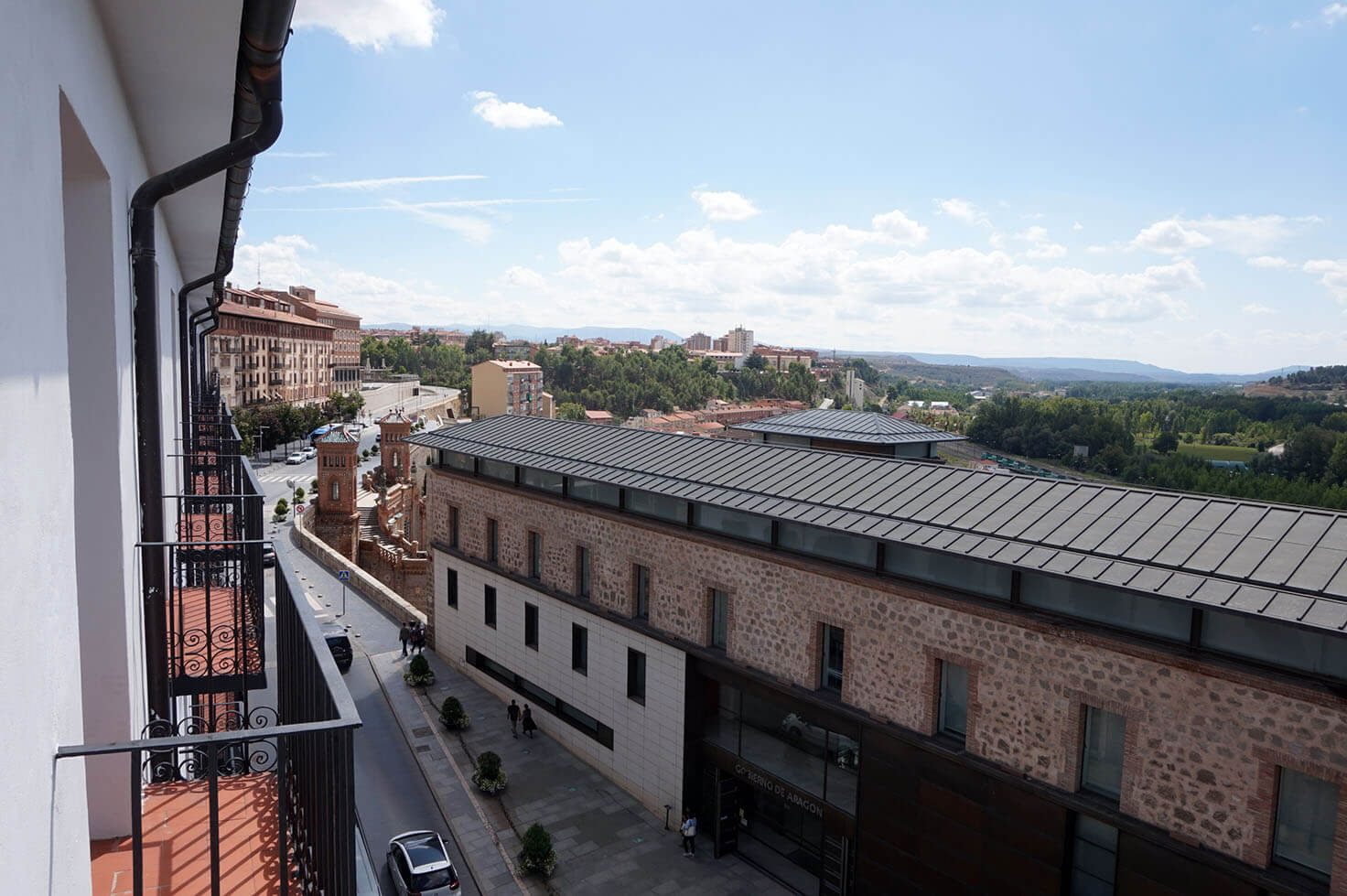 Though Teruel is small, it is a real city. On the other hand, Albarracín is barely a town.  Likewise, if Teruel’s location on a high plateau is dramatic, wait until you see Albarracín. The town, perched on a rock on the slopes of a mountain, is surrounded by the River Guadalaviar. Albarracín, with its narrow streets and hanging houses, sits high above the river. Before the rise of Teruel, it was the most important city in the area. At one point this quiet little town was the capital of a Berber taifa kingdom and later on an independent Christian lordship. Today Albarracín is without a doubt one of the nicest in the whole of Spain. 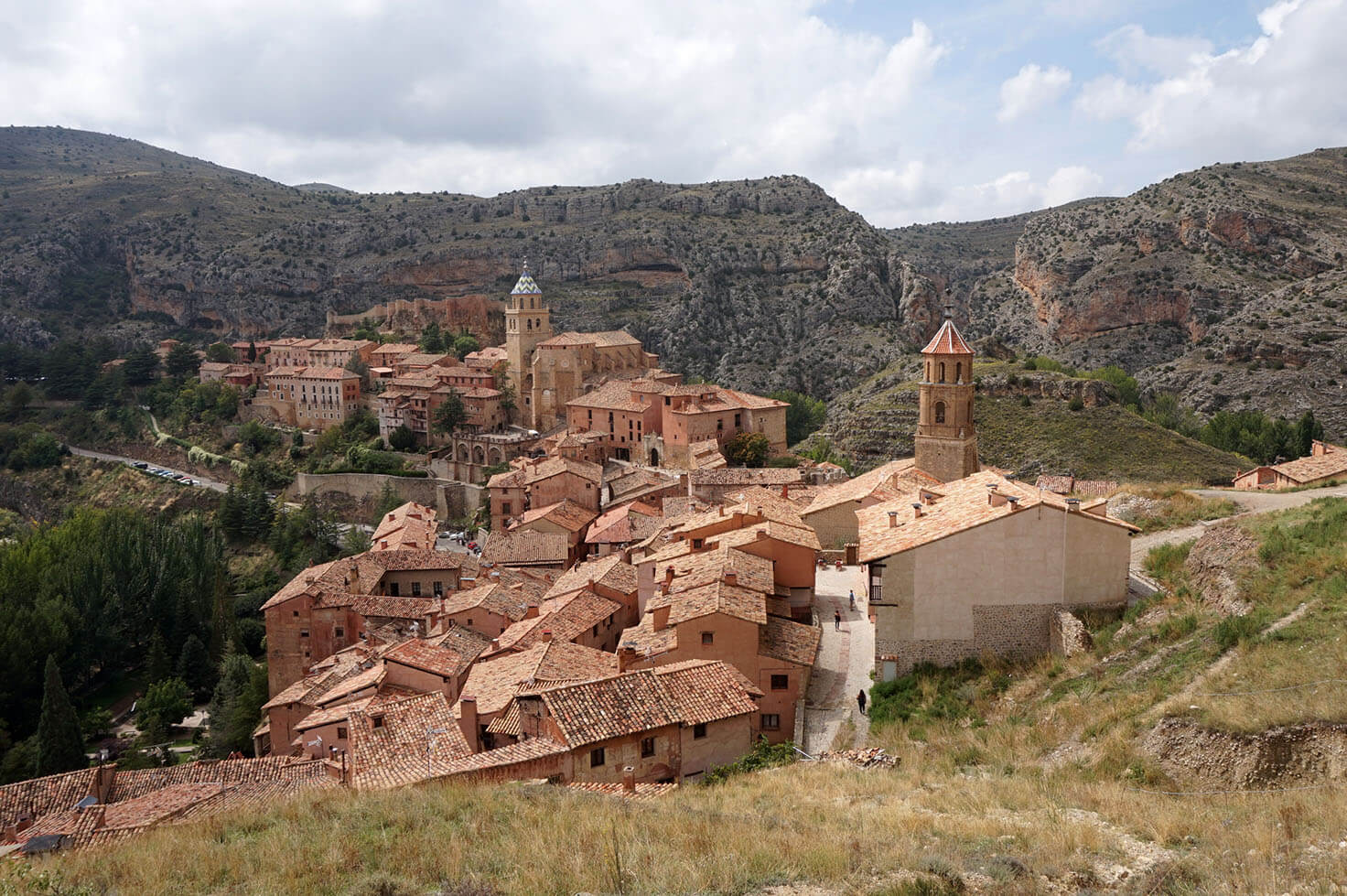 What to See in Albarracín

Albarracín harmonizes nature and architecture brilliantly. The old town is so small that if you climb the hill to the north you can see it entirely. There you’ll spot the imposing medieval City Walls built to defend the town from the Muslims. On the other side of the town, you’ll find an even older castle used to defend the city from the Christians: the Alcazar of Albarracín. You see? Depending on the time, one was the good guy and the other one the bad guy. In any case, the place is so pretty that everybody wanted to control it! The Albarracín Cathedral is next to the castle. The elegant Gothic and Renaissance church from the late 16th Century dominates the cityscape. Another place you shouldn’t miss is the handsome Plaza Mayor with the 16th Century City Hall. 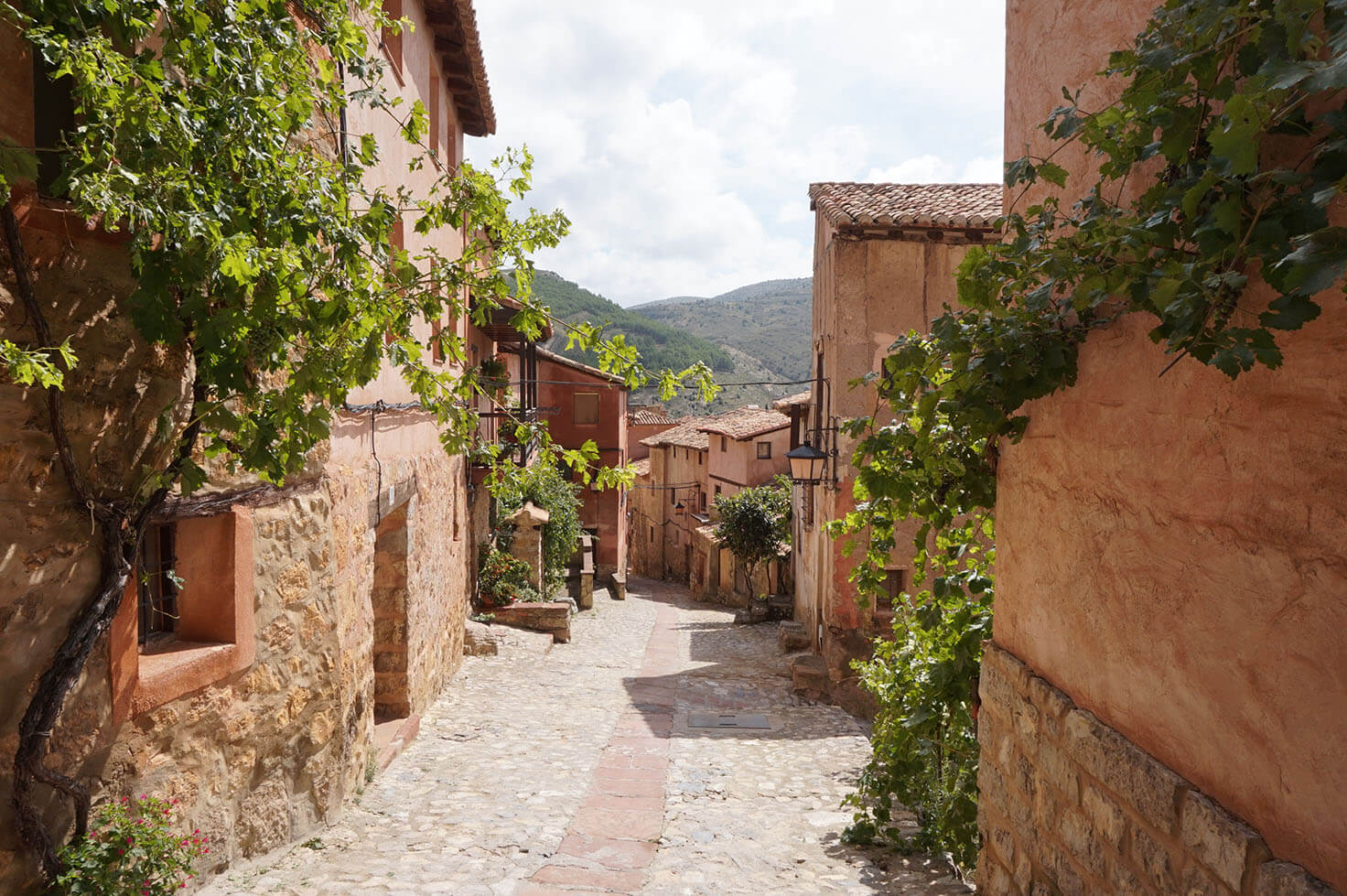 You can admire Albarracín’s peaceful environment for days. Furthermore, getting lost amongst its curvy streets will reward you with a different vista at every corner. But that’s not all Albarracín offers. The place is a superb hiking destination. If you are short of time, you should walk all the way to the City walls and along the River Guadalaviar. Both are easy walks you can complete in a couple of hours. Probably the nicest natural spot is the protected area of Pinares de Rodeno. Located just 3km southeast of the city it offers great hikes among pine trees. The area is famous for its giant red stones and spectacular views. On the other hand, if history is your thing go visit the 25km long Roman Aqueduct Albarracín – Cella. Its nicest part is in Barranco de Los Burros, just north of Gea de Albarracín. Where to Stay in Albarracín

Albarracín has plenty of nice hotels to choose from. Most of them are located inside or next to the Old Town. Though the place is small, staying around the old town has a special charm. Additionally, most hotels are historical buildings. We chose the fantastic Hotel Arabia for that particular reason. Located inside a monumental 16th Century convent it was a great base to explore the city. We’ll never forget the spectacular views from our room. Inside the old town, you’ll find the renowned Hotel Albarracín and Mesón del Gallo. Other interesting options are the Hotel Albanuracín, the Posada del Adarve, and the Los Palacios. 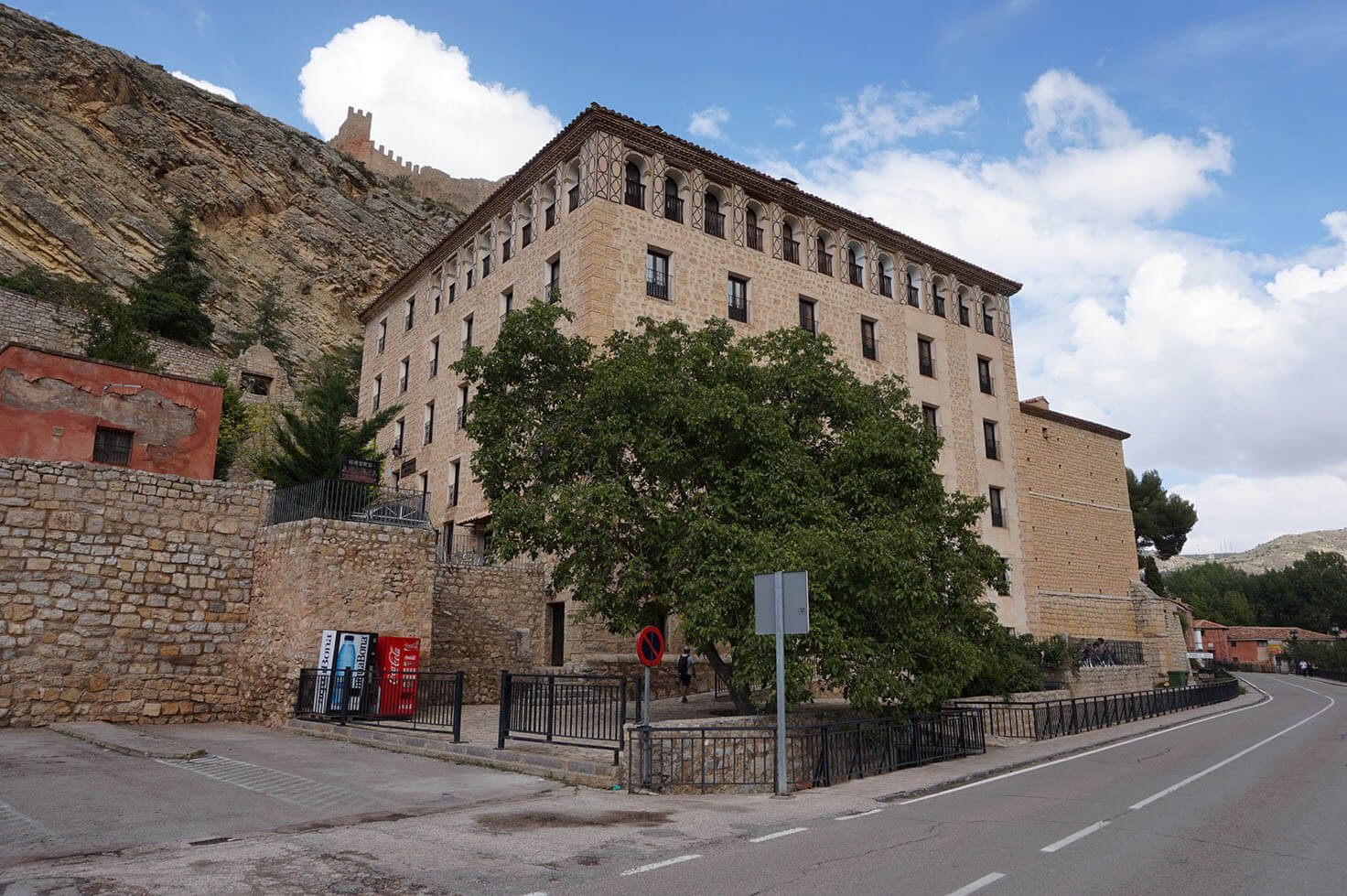 How to Get to Teruel

As mentioned above Teruel is located between Zaragoza and Valencia, thus it’s fairly easy to get there. Daily trains and buses connecting these two large cities stop in Teruel. Four comfortable trains operate each day and the journey from both Zaragoza and Valencia takes about 2,5 hours. If you rather take a bus, 6 depart each day from Zaragoza. The journey takes between 2 to 3 hours. Direct buses from Madrid get to Teruel in 4 to 5 hours. Though one bus a day connects Teruel and Barcelona, it’s an almost 7-hour journey. Actually, the best way to go from Barcelona to Teruel is to take the fast train AVE to Zaragoza, the journey takes 1,5 hours. Once in Zaragoza you can take a bus or train to Teruel as described above. 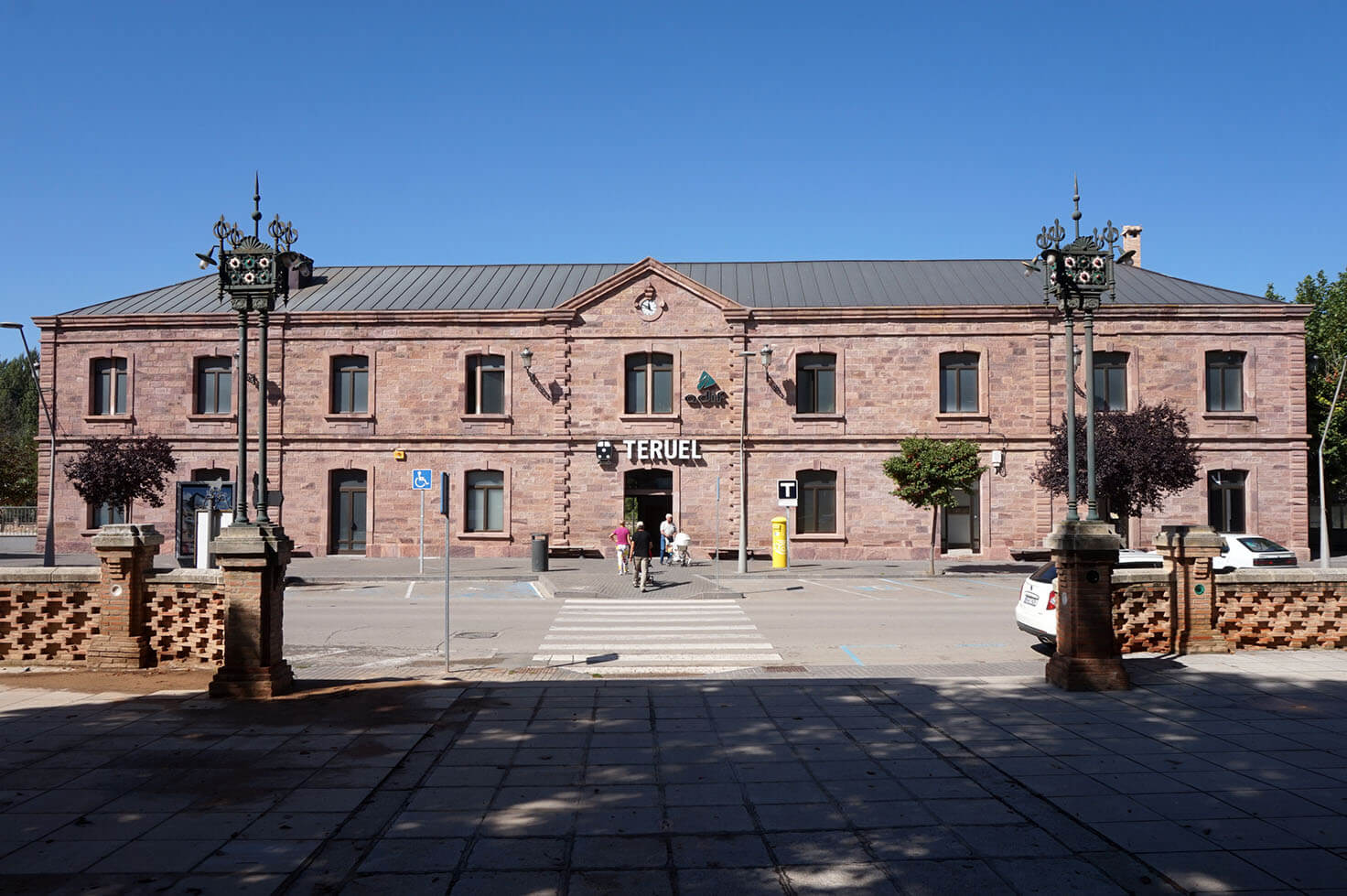 From Teruel to Albarracín

To go to Albarracín, you must go to Teruel first. Take note that there is one public bus a day from Teruel to Albarracín, except on Sundays. A taxi between the two cities should be around 50e one way. We took a taxi from Teruel to Albarracín and the public bus early in the morning to go back. Taxis are easy to find just across Teruel’s train station. The bus in Albarracín stops in front of Hotel Arabia. In Teruel there is a bus station, at the edge of the old town, some 800m from the train station. Be sure to grab a window seat to enjoy the scenery. 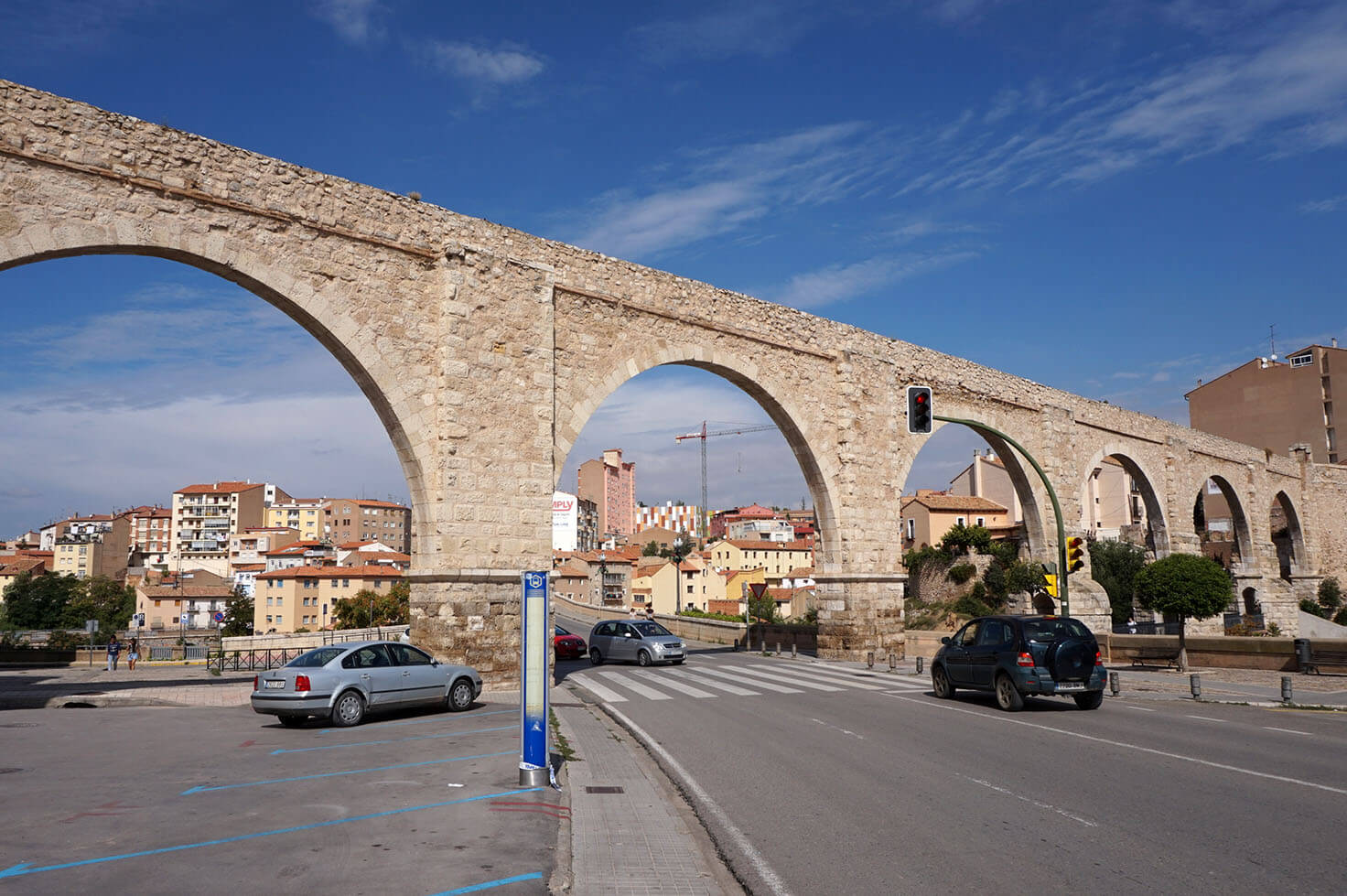 Tips for Visiting Albarracín and Teruel

You shouldn’t visit Albarracín and Teruel if you have less than 3 days. Both cities have interesting architecture plus you need at least an extra day to explore the natural surroundings. A lot of people go to Albarracín just for the day. What a mistake! Not only the sunset provides killer views, but walking about Albarracin at night is a must. Likewise, try to avoid weekends, especially in Albarracín, since it can get crowded and buses don’t operate on Sundays. 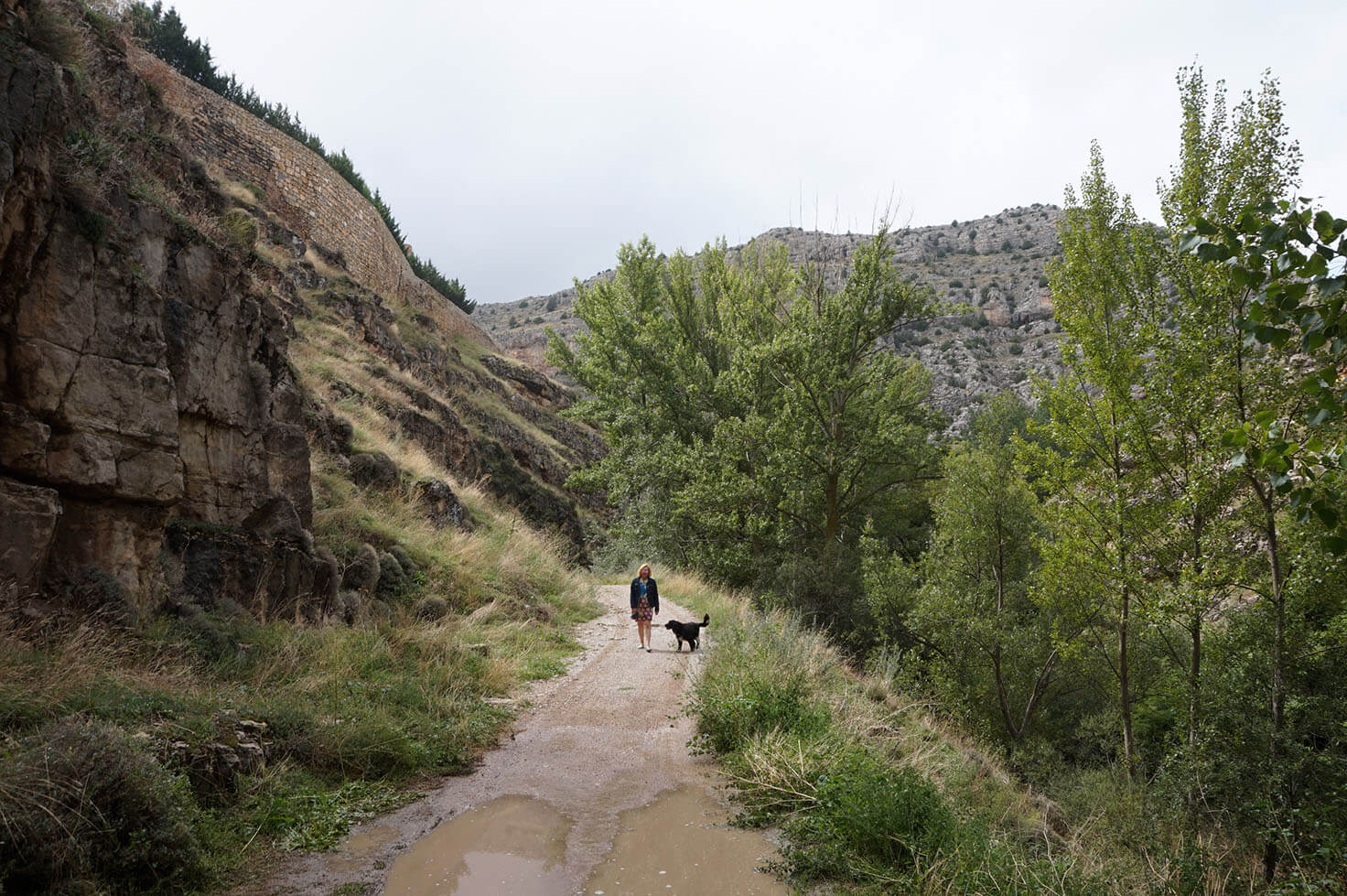 In both places stay in the old town so you can let yourself go and travel in time. In Teruel, have breakfast in Café Muñoz, on the main square. They serve the famous Teruel ham and delicious cakes! Take note that opening hours vary in Albarracín. In low season restaurants close early for dinner. To enjoy the best views climb one of the Mudejar Church towers in Teruel and the City Walls in Albarracín. 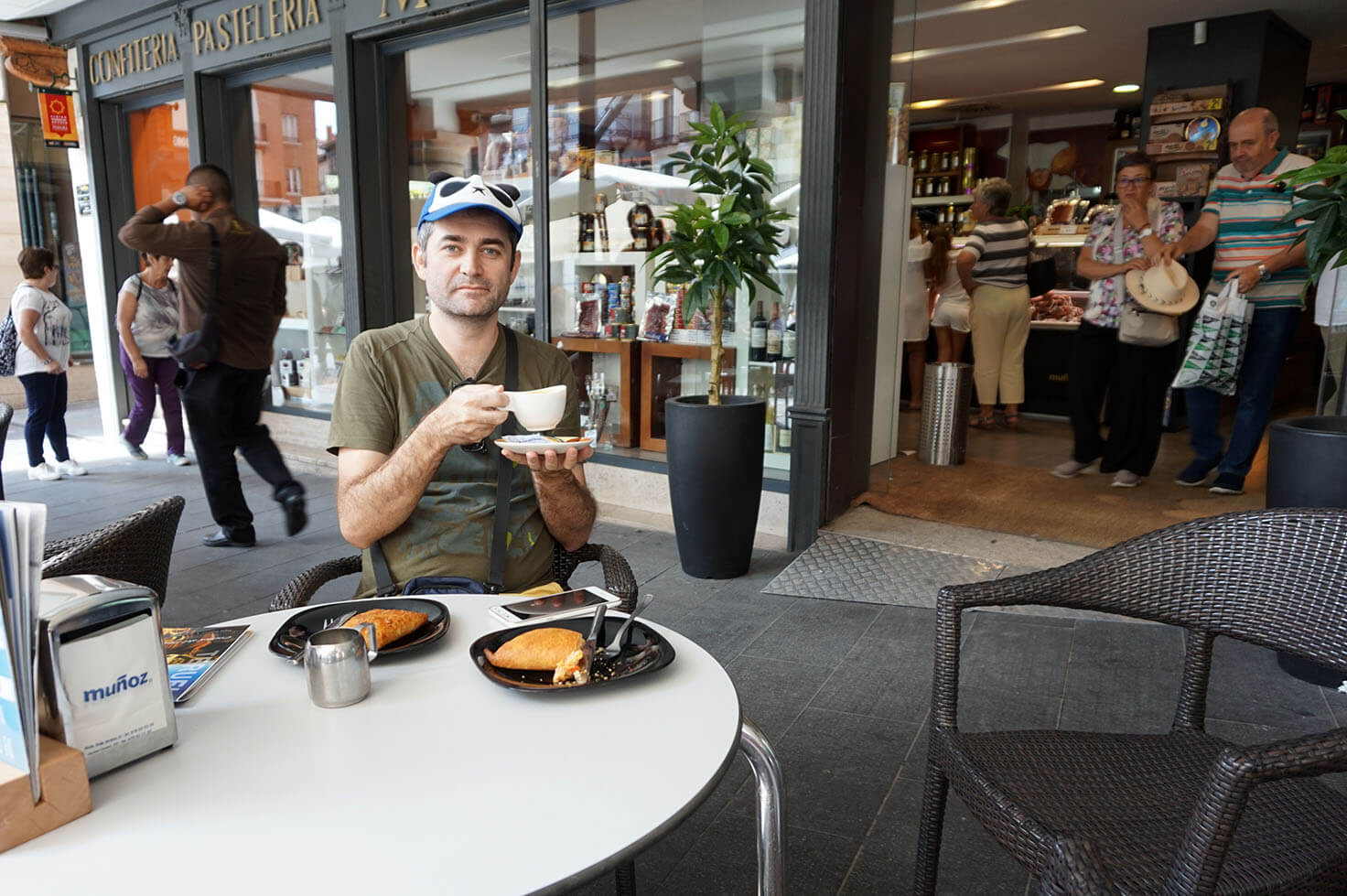