We had to take our bus from Guilin to Hunan by mid morning. Our hotel had requested a taxi with one of those ubiquitous Chinese apps, but there we were and there was no taxi. So we stopped one on the street and hopped on very agitated demanding to go the bus terminal. The lady behind the wheel didn’t understand where we were heading, since Guilin has three intercity bus stations. We were getting nervous going up and down streets without any clear direction. It was getting very late and to my embarrassment we started panicking and shouting at our poor driver. She was on the phone asking for directions, staring at our ticket, with no clue where to go. Luckily for us, she found our way and after profoundly apologizing for our un-cool behavior we made it to the bus station on time. After so much drama, we were more than ready to relax and enjoy our ride from Fenghuang to Zhangjiajie! 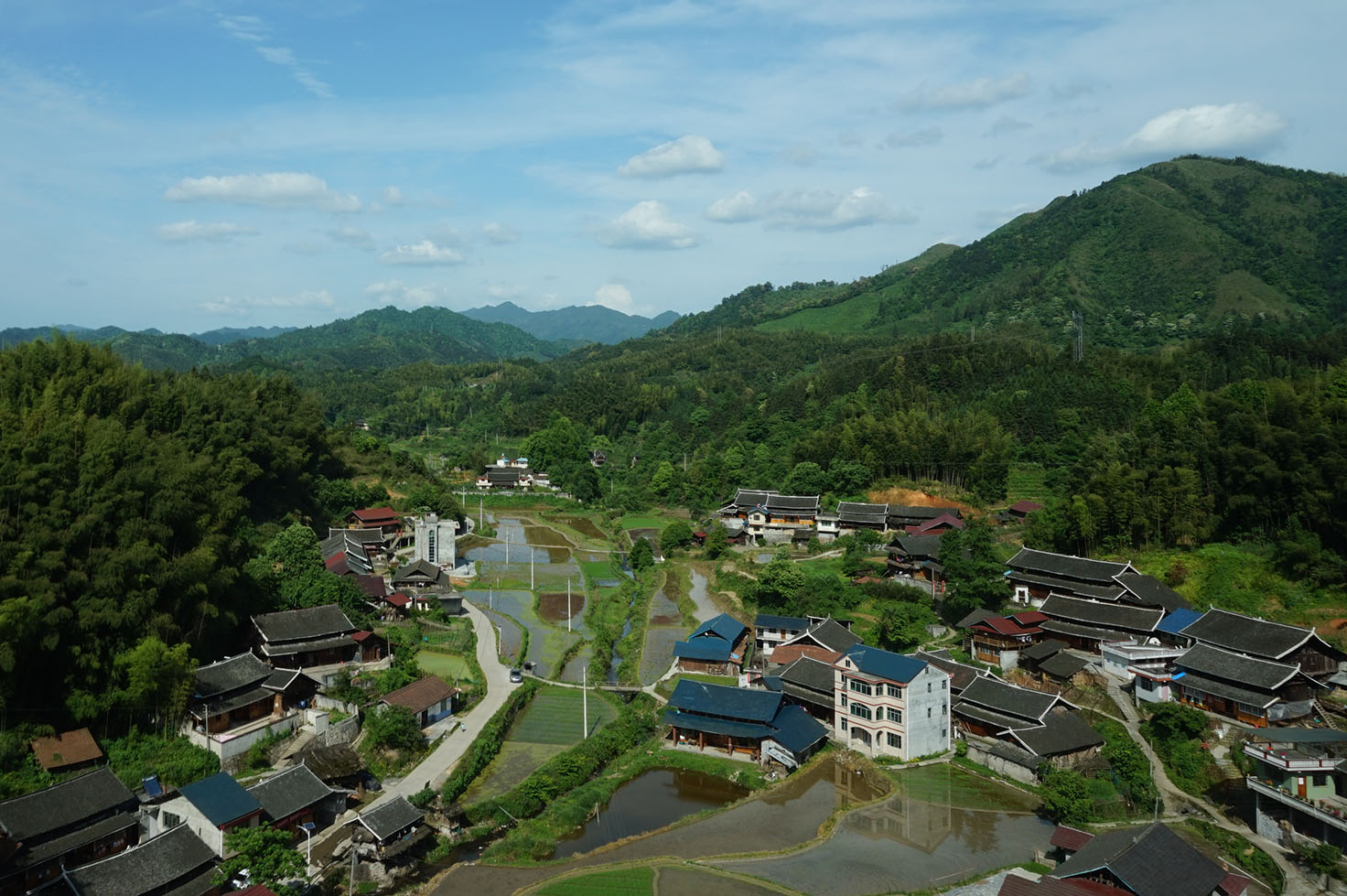 The six hour bus ride to Fenghuang Ancient Town in Hunan Province turned out to be a journey in itself. There are so many articles about China, its huge cities and booming economy, but very little info on how beautiful the countryside is. It was a lovely sunny day, there were a few passengers on the bus, so legs stretched we relaxed, lush green mountains, endless rice fields and charming ancient villages to our right and left. Upon arrival we took a taxi directly to our Yinji INN Hotel and yes, it got better still. We were literally on top of the city, with our private balcony, green tea and dream like views. 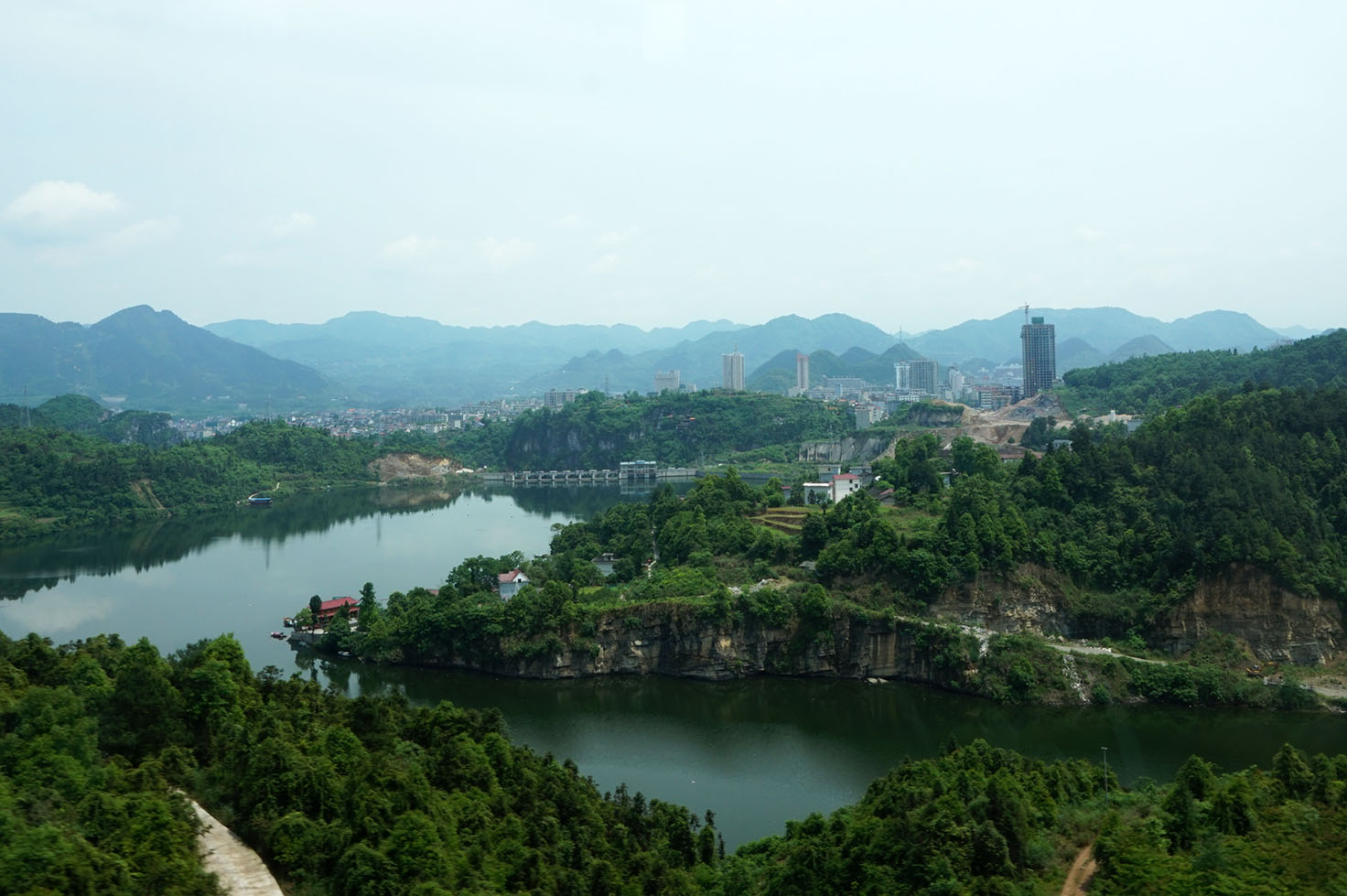 The Fenghuang Ancient Town is located in a remote mountain area between the central plain and the South West. City walls, curvy cobbled streets and over 200 ancient houses showcase its 300 years of long history. The Tuojiang River divides the city and can be crossed through several bridges and stone paths. Green hills surround the city. We climbed some of them and enjoyed spectacular views. We would explore Fenghuang’s narrow streets during the day and be back in our hotel for a killer sunset. Then back to the city for a nightly walk. Well, the city was actually under our feet. All we had to do was to take a few steps down the street and we were there. Be sure to get the heritage ticket that gives access to several ancient houses, the beautiful Hong (Rainbow) Bridge, and even a short boat trip ride. Fenghuang has two fascinating things: architecture and its people. Everyone is having a great time. It seemed to us that tourists come from far away, so they were as delighted as we were to meet each other. No communication but loads of laughs! Most restaurants keep animals in cages on the street: dogs, cats, ducks, geese, rabbits, birds, fish, and some very unhappy frogs. Apparently some are endangered species. You can order everything from the menu. Other places offer stinky tofu, a smell hard to forget. Just like in Lijiang and Yangshuo, locals rent traditional costumes and spend hours posing in front of photographers and taking selfies. At night many cafés become discotheques with incredibly loud music and vivid colors. One night a bunch of kids standing in line were laughing and reciting words in English. One day I met a girl. She was turning 18 and asked me to take a picture with her. In exchange she gave me two postcards. Wasn’t I supposed to be the one giving presents? Planning our visit to Zhangjiajie National Forest Park was a delicate task. Actually getting from Fenghuang to Zhangjiajie was the easiest part. I was not sure of where exactly to enter the park and accommodation options nearby were not clear. The whole area was hard to grasp. The Eden Mountain Village hotel claimed to be located just outside of one of the entrances so we took a risk and stayed there. It was one of the most memorable experiences ever. Perched over a hill next to a small river and directly overlooking mountain peaks, it was magical at night. There were blackouts so we were able to enjoy out of this world stars up in the terrace. Zhangjiajie National Forest Park is probably the most beautiful natural sight I have ever seen. The park includes thousands of tall pillar-like formations that are the result of physical erosion (limestone karst from chemical erosion). The park is 3600km2 big with roads under and over mountains, three cable cars, a super fast elevator and a zip-line train. Our hotel receptionist was brilliant. She gave us a map and explained different possible routes. Time inside the park is of essence since it closes early and you might get locked in. We were only 10 minutes from the western gate so we entered the park on foot and were among the few tourists to take the park bus. The park is extremely popular and overcrowded but we were very lucky and walked in opposite direction to the masses.

The first day we took a couple of cable cars, walked down the mountain, next to the river and met many monkeys and funny Chinese. We even took the famous Bailong Elevator. Thousands of people queuing to go down and we went up entirely on our own! The second day we went up the hill, crossed the famous bridge with the scenery from Avatar and enjoyed views over Tianzi Mountain. One more fantastic perk of our hotel: we walked all day long through the park exiting to the pretty town of Wullingyuan, while they sent our baggage directly to Zhangjiajie City where we spent our last night. When you travel for months sometimes you need a break spending a day or two doing nothing. In Wulingyuan Town we booked chic Maosao Inn where we spent an evening watching the sunset from its spectacular roof terrace. We discovered a couple of delicious bakeries and walked by the river soaking up the atmosphere with gorgeous mountains all around. Then we took the local bus to Zhangjiajie City where we stayed in the Waterpark Hotel only to find out its water park was closed. What a scam! The main reason we spent a day in Zhangjiajie City was to visit nearby Tianmen Mountain. We were still overwhelmed by Zhangjiajie National Forest Park so we didn’t expect much. Holy cow, what a place! We took the cable car directly from the city center and spent hours walking over the mountain. Super long alleys hang off cliffs, some made of glass. It was so much fun watching tourists scared and unable to move. We took hundreds of pictures with so many people and even managed to escape the heavy rain. To go back we took long escalators down to the famous Tianmen cave (natural arch). From there we had to break our knees going down endless staircases to take the bus back to the city. Finally, we boarded our plane late at night to Hangzhou. We were and still are full of crazy emotions. Hunan is like this huge amusement park nature took thousands of years to create. The Chinese built the perfect lovely towns, cable cars, bridges, elevators and roads to enjoy it. Hunan is too good to be true! How to get from Fenghuang to Zhangjiajie