Diyarbakir is one of Turkey’s most beautiful cities. The unofficial capital of Kurdistan has a very long and rich history. It is also modern, dynamic, and full of life. The city spreads across an incredible desert. As you can imagine, there are plenty of things to see and do in Diyarbakir and the surrounding area. Fortunately, Diyarbakir is still free of mass tourism. Thus, you might have the whole place to yourself.

Diyarbakir is unique in many ways. Its main draws are all UNESCO World Heritage Sites: the impressive city walls, lavish green fields, and an old bridge. Several old houses, churches, and mosques complete the feast. Even art lovers will find something interesting in this glorious city. Foodies will be happy to know that the food is delicious and varied. 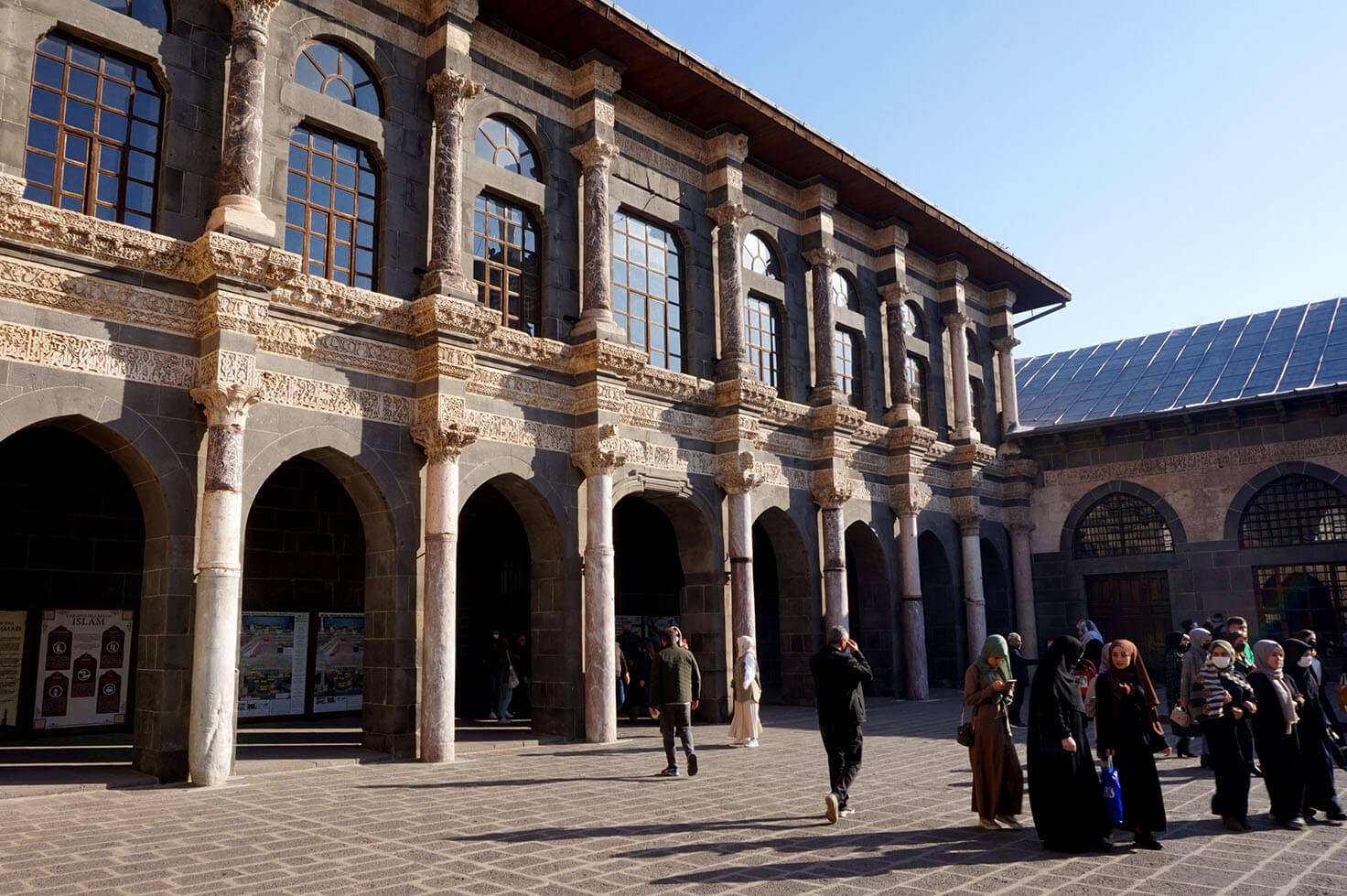 Just like you, before going, we wondered: is Diyarbakir safe? It’s a logical question after the infamous incident between the locals and the central government in 2015. Luckily, things have settled down, and we are happy to report that Diyarbakir is a very safe city. Locals are friendly and will help you around.

That said, you should always act with caution like you would in other big cities. Parts of the old town have very narrow streets that lack street lighting at night. Thus avoid those areas. All the main streets in the Old Town have street lights, and people shop and eat out until the late evening. The new town is also perfectly safe. Where to Stay in Diyarbakir

Though staying in the city center seems like a good idea, we wanted to stay in the middle of the old town. We chose the Green Park Hotel, the best hotel in Diyarbakir and Southeastern Turkey. It’s a modern hotel offering large rooms with great views and a spa center. The hotel’s restaurant is a historic inn from the 14th century. Loved it!

Diyarbakir offers accommodation for all tastes and pockets. Most hotels in Diyarbakir are in the modern city center, just north of the old town. Two of the best hotels in the area are the New Garden Hotel and the Dies Hotel. Both are contemporary and elegant hotels, with large and comfortable rooms. You can’t go wrong. How to Get to Diyarbakir

The best way to get to Diyarbakir is by flying. The city has a mid-sized international airport with regular flights from Istanbul, Ankara, Antalya, and Izmir. During the high season, there are flights to several German cities. There is also a train from Ankara. However, the journey takes over 21 hours. We’ve heard that a new fast train between Ankara and Sivas will open soon and shorten that time significantly.

If you are coming from other places in the region, you should take a bus. From Sanliurfa, there are regular buses every hour or so. If you are coming from Mardin, you have to take a minibus – dolmus. They leave once full and are less comfortable though cheaper. From Midyat, you should take a minibus to Batman and change to another one to Diyarbakir. Take note that Diyarbakir’s bus station is far from the old town. The Best Things to Do in Diyarbakir

Walk along the City Walls

Diyarbakir hosts the widest and longest city walls in the world. The walls are only shorter than the Great Wall of China. Though the oldest walls date back to 6th century BC, the actual ones are from Roman times. The emperor Constantinos II commissioned them in 4th century AD. Since then, they have been rebuilt many times using stone, black basalt, and adobe.

The walls are also known as Diyarbakir Fortress. They surround the city’s old town. There is a gate in each cardinal direction: Dag Gate, Urfa Gate, Mardin Gate, and Yeni Gate. You can go up the walls at Mardin Gate (at the beginning of Gazi Street) or 400 meters east from there, above an art space inside the wall. When we visited, Istanbul’s PILEVNELI art gallery had taken over the space. We loved the incredible contemporary Turkish art! Admire the Hevsel Gardens from Above

If you walk along the southern side of Diyarbakir’s city walls, you’ll spot a massive green area to the south, by the Tigris River. These fields are the historic Hevsel Gardens. The unique green area has been supplying the city with food and water for centuries. Today, one-third of the gardens are used to grow poplars. Different types of fruit and vegetables occupy the rest.

You can walk to the gardens from the old town. Exit by the Mardin Gate and turn left on the road leading down from the busy Eski Mardin Yolu. Take note that there are many wild dogs by the road, so be extra careful. Taxis won’t get you to the gardens either. So we recommend only visiting as part of a large group. Otherwise, you can admire the gardens from several scenic cafés or the viewing platform outside the walls. Mingle With Locals by the Dicle Bridge

The historic Dicle Bridge, also known as Ten-eyed Bridge, crosses the Tigris River just south of Hevsel Gardens. It was built in 1065 during the Marwanid period. The bridge is 178 m (584 ft) long, 5.60 m (18.4 ft) wide, and consists of 10 arches, thus the name. It is made entirely from local basalt stone.

The bridge is a popular attraction for both locals and visitors alike. Locals come here to walk, take photos, dance, and sing. Across the bridge, there is a newly created recreational area with a mosque. Nice cafés serve tea in large traditional pots on both sides of the Tigris River. Find the best lounge, lie down on the cushions, and drink tea while enjoying the magnificent views of the bridge. The Great Mosque of Diyarbakir, also known as Ulu Cami or the Grand Mosque, is one of Turkey’s most impressive mosques. Muslims consider it the fifth holiest site after the Umayyad Mosque in Damascus. The Seljuq Sultan Malik-Shah wanted a more important Diyarbakir. Thus, in 1091 he commissioned a mosque that was to be as grand as the one in Damascus.

The main entrance leads to a large courtyard with porticos on the east and west. The mosque is on the south, while the Mesudiye Madrasa is on the north. Behind the western portico lies another madrasa, Zinciriye. As you can imagine, black basalt stones cover most surfaces. Remember that this is a place of worship. Diyarbakir hosts a plethora of attractions. Among them, several impressive mosques take the top spot. The most famous is the Sheikh Matar Mosque, known for its Four-Legged Minaret. Hajji Hüseyin built the mosque in 1500. It’s a single domed building with a squared base. The four-legged tower from 906 AD became a minaret once the mosque was built.

The Hazreti Süleyman Mosque is much older, from 1169. It has three different sections and a squared-based minaret. Several members of the Bekir clan have their tombs here. The last mosque worth visiting is the Behram Pasha Mosque from the 16th century. The main façade has a double portico with five domes. It is notable for its characteristic black and white stripes. Christians from different backgrounds lived in the city through the centuries. Dozens of ancient churches are a testament to those times. Thus, Diyarbakir has more than one Armenian Church. St. Giragos Church is the grandest of them all. It probably dates back to the early 17th century. It was destroyed in 1915 during the Armenian Genocide and reconstructed in the 2000s. Since it was severely damaged in 2015, it is now under reconstruction.

Another church with a special place in Diyarbakir’s history is the Virgin Mary Assyrian Church. The original structure dates back to Roman times, the 3rd century. However, many parts are from the Byzantine period. During the Assyrian Period, it was the seat of the Patriarchs of the Assyrian Church of the East. It’s closed most of the time. Thus, ask around to see if you can get in. Though the government demolished roughly one-third of Diyarbakir’s Old Town, several historic inns (Hans and Konaks) still stand. Walk around looking for these ancient Armenian private houses. You will recognize them from their alternating black and white basalt stones and rich decorations. The grandest houses have an inner courtyard with a small garden. Some of them are now museums.

Don’t miss the Ahmet Arif Literature Museum Library, the Cahit Sitki Taranci House Cultural Museum, and the Ziya Gökalp House Museum north of the Grand Mosque. Take a look at the old surviving inns scattered around the Old Town. The best is the late 17th-century Suluklu Han. Turkish forces occupied the building during the War of Independence. The other three historic houses worth visiting are the Iskender Pasha Mansion, the Cemil Pasha Mansion, and the Dengbej Evi House. Visit the Castle and the Museum

Diyarbakir Castle is to the northeast of the City Walls. Since the Roman compound is currently under reconstruction, you can only admire it from the Archeological Museum next to it. Massive walls surround the castle and the museum on the north, west, and south. Stop by the terrace to the east. The views of the valley and the Tigris River are stunning.

The Archeological Museum is the most important museum in Diyarbakir. It holds a large collection of archaeological artifacts and ethnographic works. Don’t forget to check the rest of the compound, including Artuklu Palace and St. George Church from the 3rd century. Dashing young couples soon to get married come here to take photos. The museum’s café/restaurant serves delicious food on the terrace. Have Coffee or Tea in a Grand Inn

There are half a dozen historic inns in Diyarbakir’s Old City. Without a doubt, the most impressive is Hasan Pasa Hani, opposite the Grand Mosque. It was built between 1572 and 1575 by Vezirzade Hasan Pasha, the son of the Grand Vizier Sokollu Mehmet Pasha. It’s a two-story building surrounding a large rectangular courtyard with a fountain. Splendid cafes and shops line the corridors.

Though you can eat at the inn, locals mostly flock here to have Turkish coffee or Tea. The Turkish coffee is made of finely ground coffee beans without filtering. It is usually served in a small pot called Cezve. Turks are the biggest tea consumers in the world. So, you should try a typical Turkish black tea. There are several coffeehouses in the inn, so choose the best spot and enjoy the vibe! Go for a Dinner in a Hammam or Caravanserai

Turkey is known around the world for its delicious food. To our delight, fantastic eateries of all kinds dot Diyarbakir. Not only is the food great, but you get to eat in historic buildings. Fırın-ci Sur is Diyarbakir’s finest restaurant. Enjoy traditional Turkish food in a carefully reconstructed 19th-century bathhouse (Vahap Ağa Hammam)!

We have two historic Caravanserai to recommend. The first is in the Green Park Hotel. Sakli Konak from 1317 is a fancy place visited mostly by locals, with great food and live Turkish music. The other one is Deliller Hani or Evidence Inn, a couple of blocks away. The city’s second governor Divane Hüsrev Pasha built the simple but massive structure in 1527.